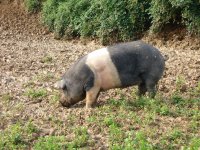 The pig domestication seems to date back to 7000 BC. The Greeks and Romans liked him very much for its meat and also sacrificed it to the gods. In the more recent past the importance of this animal has remained almost unchanged for all these centuries. The killing of the pig and then the "pista" or "salata", as it is called in the Marche the pork processing, were days of celebration. The pork is eaten fresh or treated for its conservation and use during the year. For the rural population of our region, preserved meats of pork were often the only ones that were available: the loin and ham had the longest duration along with the lard used to give flavor to condiments. 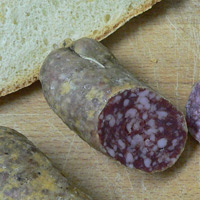 particular breed, it's the result of traditional breeding and, above all, a genuine feeding with flour and feed that nature has always ensured: acorns , herbs , beans, corn, etc... . Currently there is a special "Production Rule" which, in addition to the delimitation of the territory situated in Trecastelli (Castel Colonna, Ripe and Monterado), Corinaldo and Senigallia, gives a precise feeding schedule. A traditional farming for a raw material of superior quality, a real "farm product". There is even a regulation about how to prepare the "Frattula Salami" which parties to use, the salting, the addition of pepper, and local herbs, up to drying and seasoning.